The Research Behind EMF Products 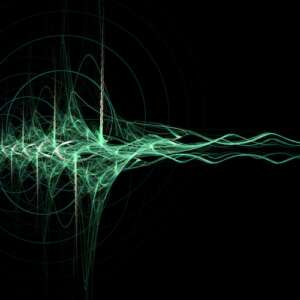 We are all very used to the electronic conveniences of modern life, with the digital age spurring on the need for faster, more efficient electronics, we are seeing (or should I say not seeing) a rapid increase in frequencies that often surround us.

Power lines, mobile phones, Wifi routers, computers, televisions, microwaves, and other appliances have electric and magnetic fields (EMFs), these fields are produced anywhere electricity is used. Did you know that there are possible health risks to exposure and that there are also products that help to balance and negate these frequencies?

I have used Life Energy EMF products for many years, we have a p.e.bal at home by our wifi and I have one of their lovely Nu Me pendants which help to balance and negate harmful frequencies when out an about.

This article looks at the effectiveness of Life Energy products through bio-feedback technology.

“We are fortunate enough that so many of our products are now out there working and that their owners are keen to let us know how well. We appreciate, however, that many people like to see “scientific” test results before considering new technology.

We were recently fated to meet Dr. Thornton Streeter of the Centre for Biofield Sciences in Pune, India. This facility has all the most advanced bio-feedback technology available on the planet at this time – combined with an expert team of doctors specializing in their use.

Dr. Streeter was initially impressed enough with our products to offer us the full use of his facilities and human resources to test both the Nu-Me pendant and the p.e.bal.

We have received the Nu-Me test results back and they are better than even we could have hoped for. For those with the time and inclination to read the full report it is available here.

For those that want a quick snapshot, I will summarize below:”

1.To determine the effect of nu me pendant over human biofield

2.To determine the efficacy of nu me pendant in balancing the chakras/ energy centers.

The following five established devices were chosen to be used for the comparison between before and after scans.

Methodology:
25 subjects were randomly chosen aged between 21-70 years of both sexes. 20 were in the experimental group and 5 in a control group wearing a “dummy” pendant. The test was single blind, meaning that only the doctors knew who was wearing what.

The total consultation lasted one hour. Initial scans were performed by the relevant experts in the respective equipment. The pendants / dummy pendants were worn for 15 minutes and then the scans were repeated.

One of these 20 scans showed negative changes.

The results of the GDV, EIS, and ESM were in correlation with PIP

It seems crystal clear that the nu me pendant has a profound positive effect on individuals.

In addition to the analysis part of the data, during experiments changes witnessed in the biofield were unusually strong and positive.

Maximum changes were seen in brow, crown and solar chakra along with significant positive change in biofield.

After use of nu me pendant calming frequencies like blue were seen predominantly in the field. It had also increased the vibrancy of chakras reduced the stress pattern seen on face in form of pooled red energy.

Predominance of green and violet was seen to increase with prolonged use of nu me pendant.

Positive effects are also seen over lung fields in some of the cases.

From this research we can conclude that nu me pendant is a very effective mode of balancing the chakras/ energy centers and also the biofield. 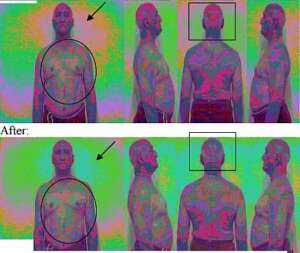 Analysis: Low energy in the bio field in form of pink and orange is replaced by calming blue and green colors which is a significant positive shift. Pooling of energy over chest, solar chakra and back of head also have reduced. 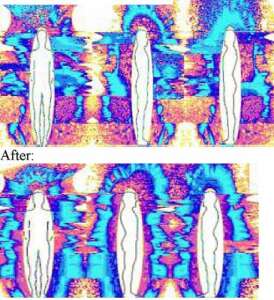 Analysis: Distorted emission is seen from crown chakra which appears to be settled after use of nu me pendant. Leaks at levels of heart and solar are replenished with reappearance of energy at level of legs bilaterally

If you want to see more click here for the full report.

Other available equipment to show this visually is the Aura Video Station. This amazing equipment shows what is happening to the body energetically (the bio-field or aura). It illustrates the fact that most people’s energy is out of balance and the devastating effect of EMF on our systems.

The following test shows 3 aura images of our subject who is male and 32 years of age: 1) base image 2) under EMF stress from a live cell phone (no call in progress) 3) wearing the Nu-Me pendant and still holding the live cell phone. 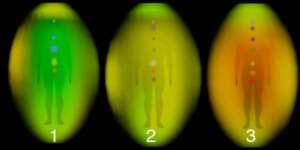 1) BASE. This shows a stable image representing our subject in a relaxed state. It shows the predominant (personality)colours to be yellow/green and that the energy centres (chakras) – represented by the coloured circles up the body to be out of balance (not regular in size). When these are small they represent an underactive center and when large, overactive.

2) CELL PHONE INTRODUCED. This phone is on and being held in the subject’s hand. There is no call in progress. This image is not a true representation of what happened in that the aura went into chaos and did not stabilise. It shocks me to think that people are carrying around cell phones all the time without any protection and so experiencing the same energetic chaos in their bio-fields all day.

3) Wearing Nu-Me. This picture shows our subject now wearing a Nu-Me pendant 75 seconds after putting it on. See how the aura is completely clear and uniform with the energy centers in an advanced state of balance. The live cell phone is still in his hand! You will note that the overall color of the aura has shifted to more of a yellow color.

This machine was invented by ex NASA scientist Bill Nelson.The Scio biofeedback / treatment machine is capable of energetically scanning any device to test it’s effect on the human body. The following represents a table of results for the Nu-Me pendant working against EMF pollution in the various frequency bands. The first column of numbers are simply for sequential reference. The second column represents the level of effectiveness. 85 is considered a significant result.

All Life Energy designs Ltd products are individually made, and are not factory produced, so each item is as unique as we are. Enjoy the care and joy that went into the production of each one.

THE TWO PHOTOS BELOW SHOW THE POSITION OF FACE AND EARS WHEN USING A MOBILE PHONE:

PHOTO 1 : WHEN EXPOSED TO MOBILE PHONE RADIATION WHILE TALKING. (RED)

PHOTO 2 : WHEN SAFE GUARDED BY A RADIATION PROTECTED MOBILE PHONE.(GREEN)

Scientists and Geologists after considerable research have found out that certain earth Minerals have the capability to successfully Harmonize the Radiation/EMF.

This is the basis of the unique Technology used in RADISAFE protective cell phone/cordless phone chips.

This product was tested for its EMF harmonizing capability through Kirlian Photography before and after affixing the Radisafe protective Chip.

A Kirlian photo of a Cell Phone was taken when it was receiving an incoming call. The photograph showed that the Cell Phone was surrounded by EMF which was indicated by the Red Yellow and Orange colours. 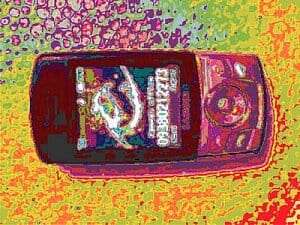 During the incoming call, a Radisafe protective chip was stuck to the backside of the Cell phone and a Kirlian Photograph was taken. Instantly the colour surrounding the Cell Phone changed to Blue and Green. Thus indicating that radiation surrounding the Cell phone had been eliminated/harmonised. The colour codes and their interpretations are given in Kirlian colour coding instructions. 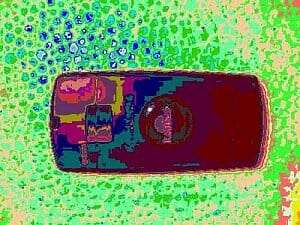 Normally mobile phones start heating up after 15 to 20 minutes of continuous use.

The Radisafe Harmonizer chip helps to reduce the heating of the Cell Phone considerably.

A Radisafe cell Phone EMF Harmonizer chip was stuck on to a Cell Phone which was used for 30 minutes continuously. This test was conducted with 20 Cell Phone users who felt little heat from their phones.

Then the mobile phone was not used for more than 2 hours. It returned to the room temperature of 31.3 Degrees C.

A Radisafe cell Phone EMF protection chip was stuck on to the Cell Phone and it was used continuously for 20 minutes. When the temperature of the Cell Phone was taken it registered 32.4 Deg C. A clear reduction of 4.3 Degrees C. A reduction of almost 80% of heat radiation! 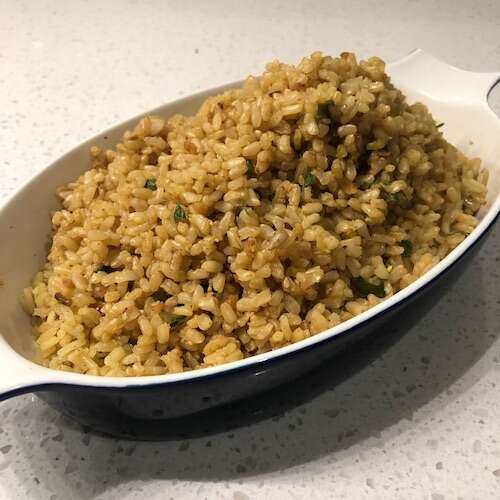 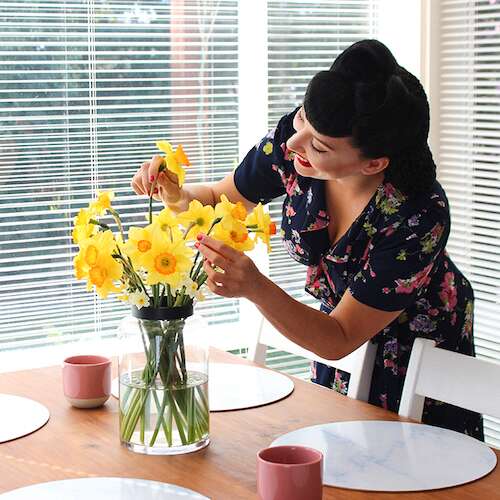 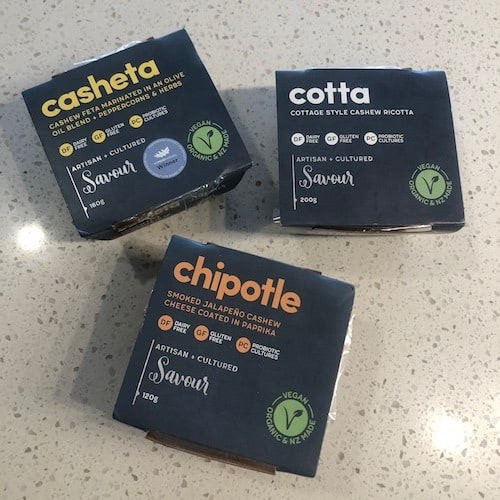